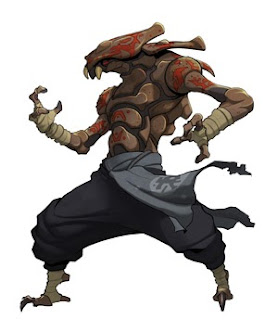 Resources wax and wane, weapons and spells become obsolete, the master craftsman of one era is displaced by the industry of the next, and even land becomes worthless with the shifting ages - information, say the sasori, is the one commodity that is always in demand.  These scorpion-like creatures are brokers of information, by turns the greatest secret-keepers and the supreme spies of Exodus.  Sasori are also known for their willingness - and ability - to kill to protect their secrets.

Personality: Sasori are excellent listeners; they prefer to hear than to be heard, and what they hear, they never forget.  A Sasori can be surprisingly personable, wheedling information from an unsuspecting informant.  Sasori are fiercely independent of outside control, and just as fiercely loyal to their clans.  Most are extremely honorable, never breaking a confidence, risking their lives for a few words on a contract - yet, their honor does not prevent them from turning on a long-time associate if someone else contracts their services.  Sasori do not understand concepts like fidelity or friendship outside the bonds of family; they are loyal to the death to their kin and the agreements they bind themselves to, but any and all outsiders are fair game.  Sasori value information above all else; to learn something from a Sasori, one must tell him something he does not know.

Physical Description: Sasori resemble humanoid scorpions.  Their hands are claws, their jaws mandibles.  Their bodies are covered with a dark, rust-colored carapce and small, fine hairs with which they ‘smell’ the surrounding air.  Sasori ‘eat’ by vomiting forth acidic digestive juices to melt their prey and lapping up the result, a process that can take several hours in the case of a large meal.  Sasori rarely wear clothes (except for concealing robes when moving about in public), instead painting elaborate clan, rank and religious symbols on their exoskeletons.

Relations: Few like the Sasori, but almost all depend on them.  Sasori are welcome at the back doors of the houses of the mighty of all races, who require their services to maintain power; cyneans and prymidians regularly partake of the Sasori’s immense stores of knowledge.  Sasori are considered a necessary evil by most people on Exodus; the common folk, who have less need and desire for information, sometimes omit the ‘necessary.’  Despite this, Sasori can be pleasant conversationalists and many find themselves treating the creatures as close confidants almost without realizing it.

Alignment: Most Sasori cleave strongly to tradition and contract - and their morals end there.  The typical Sasori is Lawful Evil.  Lawful Neutral, Neutral Evil and True Neutral Sasori are not uncommon, and a few are even Lawful or Neutral Good.  Chaotic Sasori are generally considered mad by their fellows, and are usually exiles.

Sasori Lands: Sasori can be found anywhere in Exodus.  They have few physical needs and can survive in most environments.  Sasori rarely gather in groups larger than a single clan, and even a clan may be dispersed over an entire region.  The largest concentrations of Sasori dwell in the Wildlands of Bal, leading many scholars to suggest these may be their place of origin.  If the Sasori know where they come from, they certainly aren’t telling.

Religion: Like much about the Sasori, their religion is an intensely private affair.  Outsiders are not welcome at Sasori ceremonies, and even the names of Sasori gods are closely guarded secrets.  In their own enclaves, the Sasori are deeply religious and worship a vast pantheon.  These gods preside over all aspects of ‘the long night,’ as Sasori call life, and the rituals and customs dedicated to them establish the rhythm of Sasori existence.

Language: Sasori communicate amongst themselves with a complex series of sounds, gestures and pheromones.  Other humanoids have difficulty deciphering this language, much less reproducing it.  Sasori also speak common, and many learn other languages as well.

Names: All Sasori possess both a clan and a given name.  These names are closely guarded secrets, as the Sasori believe a true name can give power to magicians and witches - and, as they are the premier brokers of information on Exodus, perhaps they are right.  Sasori use nicknames outside their clans, favoring those that reflect shadows, knowledge and the desert.
Clan Names: C’kat, Dar’rat, Kr’rt, T’kart, Za’tar
Male Names: Hd’bol, Kn’lod, Tak’fc, Ws’dm,
Female Names: Ch’ot, Mek’tal, Nki’ol, S’stal, Ut’al

Adventures: Sasori adventure either as part of their information-gathering activities or because they have been severed from their clans.  By far the majority of Sasori adventurers are spies or assassins in good standing, the only difference being that they seek information held mostly by those already dead rather than brokering it among the living.  Sasori cast out from their clans usually have few skills applicable outside the adventuring life; they may be out for no one but themselves, or they may adopt their adventuring companions as a surrogate clan.
Posted by LMPjr007 at 1:16 PM

Most Popular Blog Posts of the Last 7 Days

Things that Excite Me!